The great Unfinished Obelisk of Aswan is considered the largest Obelisk to be built by a man in the world. It was intended to be a 36m tall obelisk that weighs more than 1000 tons. The marvelous story of its building didn’t finish as during its construction and while removing the block of stone from its mother bedrock, a huge crack appeared that made the stone unusable and from this point another story has begun in Aswan called “The Unfinished Obelisk”. Through our article, you will explore all info about the unfinished obelisk of Aswan and here are the guidelines:

The Location of the Unfinished Obelisk

The Unfinished Obelisk lays now in Sheyakhah Oula, Qism Aswan in the Governorate on Aswan along the banks of the channelized LA River at the Bowtie Project.

The History of the Unfinished Obelisk 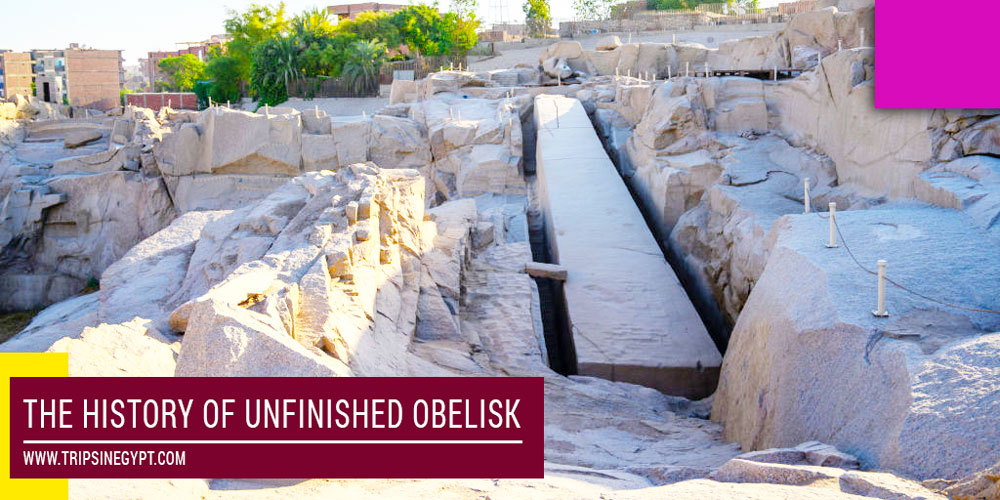 This obelisk is actually one third larger than any obelisk in Ancient Egypt. Just imagine that if it was finished, it would have measured around 42 m and would have weighed more than 1,090 metric tons that are approximately a weight equal to about 200 African elephants.

The creators of such an obelisk started in carving it out of the bedrock but the project was abandoned when a crack appeared in its granite. This Unfinished Obelisk is great evidence for the techniques which the Ancients used in their construction procedures as there are still some marks of the tools used by the creators on the Obelisk and they are so clear.

The Purpose of Building Obelisks in Ancient Egypt

Obelisks have been used by the Ancient Egyptians at the entrances of their temples. Surprisingly, they were topped with gold in order to catch the first rays of the morning light and only twenty-eight Egyptian obelisks remain standing, though only six of them are in Egypt.

The rest of the Obelisks are scattered across the globe, either gift from the Egyptian government or plunder by foreign invaders.

The best way to discover the obelisks in Upper Egypt by booking one of Egypt Nile cruise packages which enable you to see the beauty of Egypt while relaxing on the board of the cruise and also offer unforgettable trips to the enchanting temples, tombs, and obelisks of Pharaohs in Luxor & Aswan.

Interesting Facts about the Unfinished Obelisk 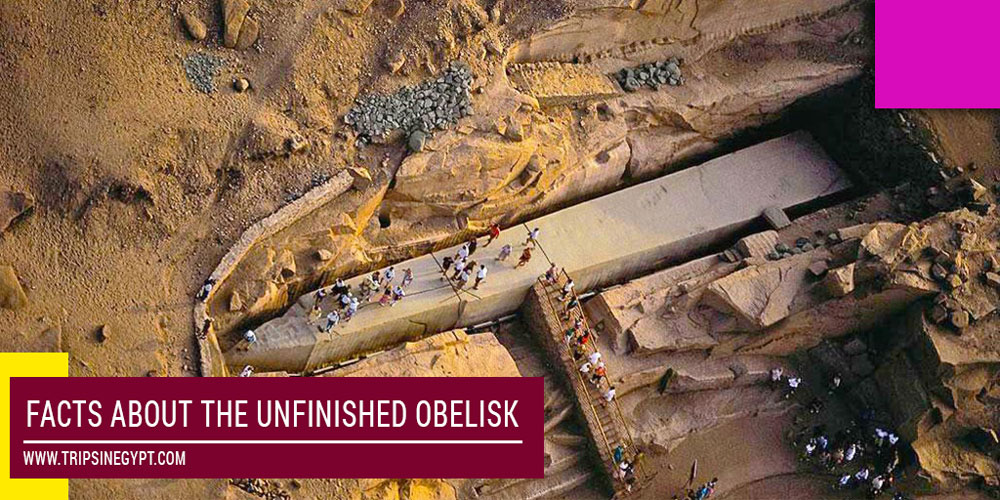 Finish What Queen Hatshepsut Started with “Trips in Egypt”

With “Trips in Egypt“, you ll be able to visit the Unfinished Obelisk with other magnificent attractions in Aswan and the other highly recommended Egyptian cities with our best tour guides to witness the greatness of the Egyptian civilization face to face. Don’t miss the chance and book one of our great Egypt tour packages to achieve your dream and enjoy an extraordinary journey in the land of Pharaohs.