With so many choices, you’ll find out that traveling to Egypt is the best choice you’ll ever have, but there has been a question that keeps appearing in the mind of everyone who wishes to visit Egypt which is “Is it safe to travel to Egypt right now?“. Let us respond to this question:

You ll be able to travel as a solo traveler or in a group with no fear of anything as during all of your trips in Egypt, you ll be accompanied by the best guides who will ease everything for you. That is not all as in Egypt, you ll be able to do all of the types of our f tourism starting from educational tourism while visiting the best historical attraction in Egypt plus your ability to have fun and relax while visiting the coastal beaches of the Red Sea which is going to be an unforgettable experience for you. Though our article, you will know why it’s safe to travel to Egypt and what’s the best safety tips to know before traveling to Egypt:

Why Egypt is Safe to Visit Now

Egypt has a long history of tourism which dates back to the time when the Greeks and Romans visited in ancient times. Europeans flocked to the country in the 19th century and they were especially attracted to Nile cruises. Surprisingly, more than 50,000 people came in the 1897 & 1898 season. Egypt was known for its antiquities as well as for its healthy, dry climate. Tourism has grown rapidly in the 20th century as the number of destinations in the country increased and travel became easier. The sector was challenged by the 2nd World War and by the mid-century events that caused instability and altered relations with other nations such as the political turmoil of the 1950s, the nationalization of the Suez Canal, and the conflicts with Israel.

The Egyptian Government is Putting Efforts to Create A Safe Country

The government in Egypt is doing its best to confront terrorism as possible as it can throughout its remarkable procedures to secure the tourist destination in Egypt in every single part of the Egyptian land. Terrorists attacks occur in all of the globe s country but the Egyptian forces keep an eye on any terrorists possible attacks to prevent them and keep Egypt as a safe country as usual that hospitalize a great number of tourists daily during the different parts of the year.

The Ministry of Tourism wants to develop other products and activities that could attract more people and offer visitors good reasons to stay longer in Egypt while enjoying visiting the mesmerizing destinations there. That is why the government has been seeking investment support and partnership with tourism product developers. Nowadays, there are some projects by the government that seek that kind of improvement including those related to golf, sailing, shopping, and wellness. The real hope of the Egyptian government is to attract everyone from the luxury traveler to the budget tourist to spend a magical unforgettable in the land of pharaohs.

Discover the Best Safety Attractions to Visit in Egypt 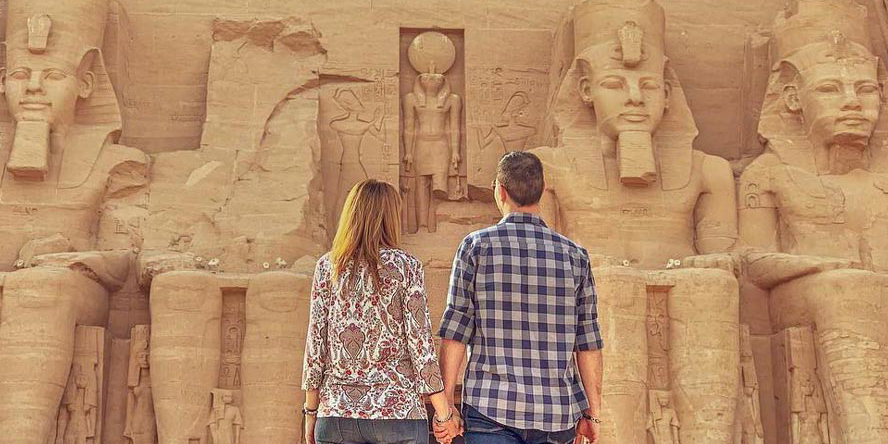 With no doubt, Cairo will be your first choice as you ll surely want to visit the great Pyramids in Giza in addition to visiting the most breathtaking Coptic, Islamic, and Historical attractions in Cairo such as The Hanging Church, Abu Serga Church, Ben Ezra Synagogue, Salah El-Din Citadel, Mohamed Ali Mosque, Khan El-Khalili Bazaar, and the marvelous Egyptian Museum.

The city that contains more than one third of the world monuments and through visiting Luxor, you ll find the true meaning of uniqueness and greatness while touring around the marvelous temples there including the magical temples of Karnak , Hatshepsut, Luxor, in addition to heading to the majestic Valley of the Kings, and the last remaining parts of Amenhotep III complex that are called Colossi of Memnon .

While touring around Aswan, you ll meet the beautiful Nubians who will be ready to help you in visiting their city and get pictures in the most beautiful places there in addition to your ability to head to the spectacular Pharaohnic destinations including the tiptop temples of Abu Simbel, Philae Temple, The Unfinished Obelisk, the High Dam, Kom Ombo, Dandara, Abydos and Edfu Temples and a lot of other great places that you ll never forget.

This city is called the bride of the Mediterranean Sea because of its mesmerizing attractions and places that you can head to while being in Egypt including The Catacombs of Kom El-Shokafa, Alexandria Library, Qaitbay Citadel, Pompey s Pillar, and other unique gardens and museum to relax and have the best trip of your dreams.

Among the most highly recommended coastal sites in Egypt, you can head to Hurghada, Sharm El-Sheikh, Marsa Alam, and El-Gouna, where you can enjoy the best coastal beaches while relaxing & meditating and with Egypt Tours Packages, you ll have some fabulous opportunities to do some adorable activities including Snorkeling, diving, swimming with dolphins, trying some submarines to discover the world beneath, and last but not least, you can go on a truly unforgettable tour to try desert safari to experience an Egyptian mixture of adventure & charm.

When You Should Go To Egypt

The best time to visit Egypt is in spring as the weather during that season is pleasant and the major attractions such as the Pyramids of Giza, Aswan, and Luxor are still fairly quiet and you have to avoid the period between June and August as it becomes so hot and you won t feel comfortable during your tours.

During the high season of December to February, you ll benefit from cheaper hotel prices, especially if traveling either side of. Choose the period that includes Egyptians celebrations including Eid El-Fitr & Eid El-Adha, Easter vacation, Christmas holidays, Abu Simbel Sun Festival, and other splendid festivals that are going to let you have a truly interesting experience.

Trips in Egypt is the best chance to get a tour more safety and comfortable where our spectacular Egypt day tours, Egypt tours packages, and Egypt Nile cruises packages will provide you the best public transportation, best possible services during the whole of your tours, terrific Egyptologist tour guides, most comfortable 5* Hotel Accommodations. Our tour operators are totally ready 24/7 to reply to your inquiries. Don’t miss the chance and book us now: